Queensland’s Gold Coast is an international tourist destination.  People come from all over the world to get a taste of the long golden beaches and sunshine, as well as the surf after which Surfers Paradise is named. 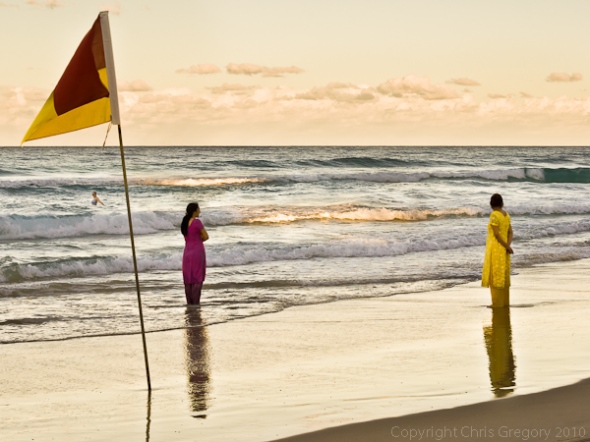 In the late afternoon of our first day at “Surfers” we encountered these ladies in sarees matching the surf patrol flag at the water’s edge near a patrolled swimming area. Their friend was swimming in the surf nearby. Notice the shade from the nearby buildings.  At this time of the year visitor numbers are fewer than in the heart of summer.  World economic problems have also had an effect.  Locals told us that vacancy rates in holiday accommodation is higher than usual.  Even fellow Australians and near neighbours from New Zealand have come in lower numbers than in previous years.  These two groups make up the greater part of holiday visitor numbers to the Gold Coast.

This entry was posted on June 6, 2010 by alphathread. It was filed under Australia, Beaches, Chris Gregory, Gold Coast, Queensland, Sigma DC 18-200mm zoom Lens, Sony Alpha DSLR - A200, Travel and was tagged with Surfers Paradise.