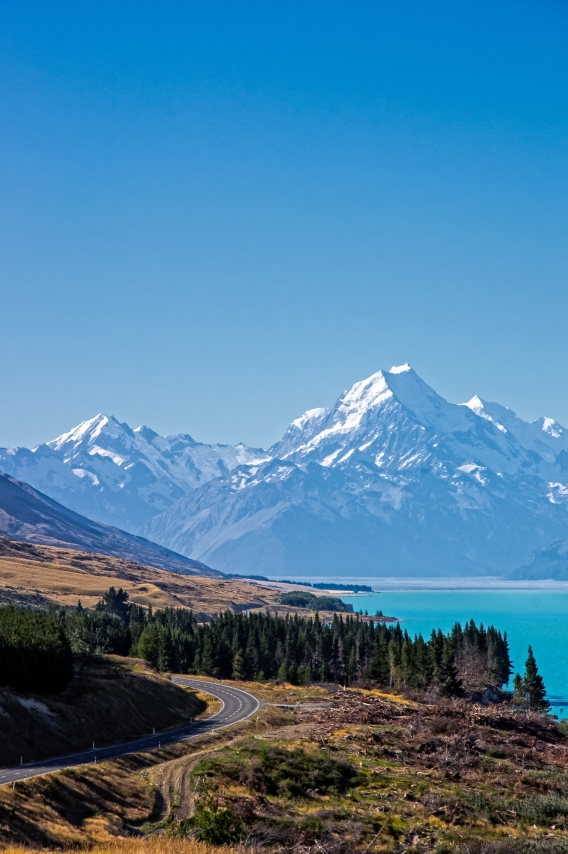 One of the best views of Aoraki Mt Cook that is available along the road  from Tekapo to the Mt Cook Village is from a layby on the side of the road called Peter’s Lookout. For such a prominently signposted viewpoint it is a disappointment to drive onto a rough gravel car park  with no information boards to explain the surrounding scenery, especially the mountains at the end of the lake.  In the foreground is a newly cut pine plantation littered with the remains of the forestry operation.  However, if you can overlook the immediate negative impressions, you are presented with this magnificent vista which features New Zealand’s highest mountain which towers to 3,754 metres (12,316 ft).

Aoraki Mt Cook is head and shoulders higher than the surrounding peaks.  It is a technically difficult mountain to climb and a favourite challenge for the climbing fraternity.  The first European ascent was on 25 December 1894.  New Zealand’s famous mountaineer Sir Edmund Hillary made his first ascent in January 1948. On 29 May 1953 he and Sherpa Tenzing Norgay were the first people to successfully climb Mt Everest.