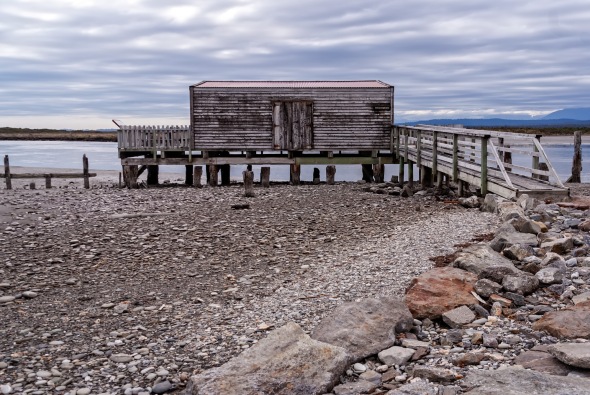 The sign on the shed said Information, but none was to be found. So, instead of taking information, I took this photograph. The shed was on a jetty at the edge of the lagoon at Okarito, a small coastal settlement on the South Westland coast of New Zealand’s South Island.

Okarito Lagoon is a coastal lagoon that covers an area of about 12 square kilometers, the largest unmodified wetland in New Zealand.  The lagoon is home of many species of wading birds, notably the extremely rare (in New Zealand) Kotuku (Eastern Great Egret). Okarito is the Kotuku’s only New Zealand breeding place. Wikipedia

The jetty is at the southern end of the lagoon. Okarito was originally a gold mining township of over 1,500 people – it is now permanent home to only about 30 residents. Apart from housing the locals, the settlement also has a small number of holiday cottages.

On the day we visited, the settlement was pretty deserted. Only a small number of kayakers were evident, getting ready to paddle up the lagoon in the hope of sighting some Kotuku – possibly in vain as kayaks are not allowed into the nesting reserve established by the Department of Conservation to protect the Kotuku’s habitat. There is a possibility of sighting birds outside the reserve however, but the numbers are small and resident only between September and march.Visits to the reserve are possible only by an officially sanctioned tour.

This view rather appealed to me, The jetty had that old weather-beating look that photographers crave for. Sure, it looks like its been renovated recently (for safety reasons no doubt), but the essence of the original is still very evident. (Click on the image for a larger view).