Rangitoto in Shades of Mauve and Orange

I have just reviewed the viewing statistics of my Flickr page and was surprised (and somewhat delighted) to find the most viewed image was this one taken early one morning about two years ago. 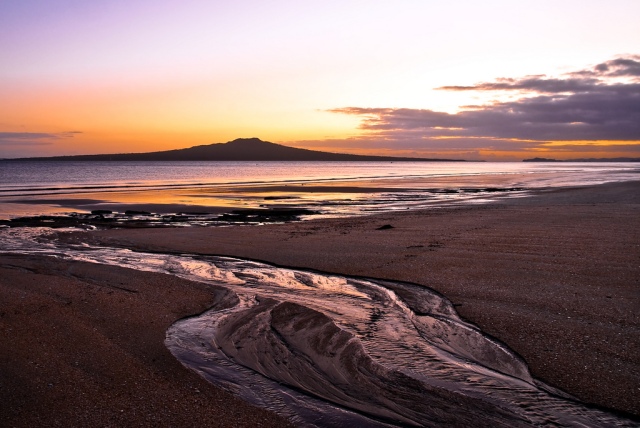 Rangitoto in Shades of Mauve and Orange

Rangitoto Island in Auckland’s Hauraki Gulf is a significant part of the view from my house.

According to Wikipedia “Rangitoto was formed by a series of eruptions between 550 and 600 years ago. The eruptions occurred in two episodes, 10-50 yrs apart, and are thought to have lasted for several years during the later shield forming episode The first episode erupted most of the volcanic ash that mantles Motutapu Island next door, and also produced the lower, northern, scoria cone. The second episode built most of Rangitoto erupting all the lava flows and main scoria cone at the apex.”

The island is reasonably symmetrical in shape and can be seen from many parts of Auckland.  All shipping that enters the Waitemata Harbour passes through the channel between the island and the Takapuna/Devonport peninsular.

Depending on the weather and time of day Rangitoto reflects various moods, as this image demonstrates.